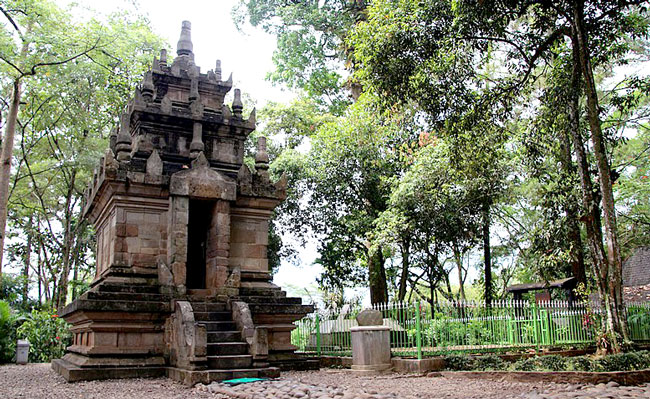 Some tourists may miss the fact that Garut City also has an interesting temple to visit. The name is Cangkuang Temple and it resides in Leuwigoong Village. In terms of region, it belongs to Leles Sub-District, though. This Hindu temple is also the part of Kampung Pulo area. The fact is that Cangkuang is the only Hindu temple in Sunda land and it resides next to an ancient landmark called Embah Dalem Arief Muhammad Tomb. Like other temples, the site is popular among tourists to do several activities like photography, relaxation, family recreation, and exploration. Some people even come to the temple to learn the history.

The Nuance
Cangkuang Temple is considered unique due to the fact that it is located in the midst of small isle of Cangkuang Lake. That means tourists should spend some efforts in order to approach the temple, as they need to get to the island first. Despite the effort, the reward is quite satisfying. Not only tourists can see such historical temple once arriving at the site, but they also enjoy the serene nuance. Thanks to the pristine environment and fresh air. Somehow, visitors can find peace during the visit!

Exploring Cangkuang Temple
For a more comfortable and efficient tour, tourists should consider hiring a guide when visiting the temple. Another reason is that they can get thorough information regarding the site. In terms of name, for example, Cangkuang is a type of Pandan leaves. The locals gave the name due to the presence of those leaves that grow on the site. People who live in nearby villages even take advantage of the leaves to make numerous traditional items like mats, wrappers, and coverlid.

The tour guide may also tell tourists regarding the history of Cangkuang Temple, in fact. It is said the temple was found in 1966 by a group of researchers. At the time, these people were looking for an ancient tomb and Shiva statue in Kampung Pulo Hill. Here is the unique thing. The temple indeed belonged to Hindu society (during the 8th century). However, there is an ancient Islamic tomb located next to it. Well, no further information is available to explain such unique mystery though.

Another thing that tourist can do on the site is to explore the temple thoroughly. Cangkuang Temple resides on an area of 4.7 x 4.7 meters and it has the height of 2.49 meters. Inside, tourists may find a historical statue having the crossed-legged pose. According to experts, this is a Shiva statue due to the presence of “Nandi” head. It is a little bit disappointing because the statue doesn’t come in a good condition. Even the face is damaged due to the age. Have no worries. It remains a good object for photography due to its historical value!

How to Get There
From Bandung City, a trip to Cangkuang Temple may take about 1 hour and 22 minutes. It is because the distance is 52.7 km. For those who look for a faster trip, they can take advantage of Nanggeleng – Cirahayu Street though. The first destination is none other than Garut Regency. Next, tourists should head to Leles Sub-District and reach Leuwigoong Village afterward. The last thing to do is to find a boat service and reach the island located in the midst of Cangkuang Lake.