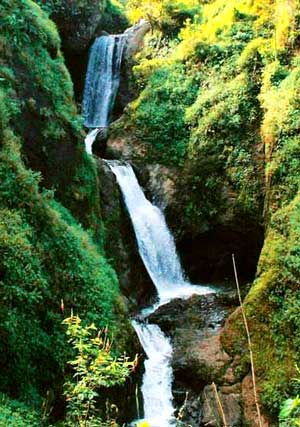 One of the most stunning waterfalls in Garut Regency is none other than Jagapati. It is located in Neglasari Village and belongs to Cisompet Sub-District, actually. That means it completes other majestic waterfalls that reside in Cisompet like Dengdeng and Ngaleng. Even though Jagapati shares the same region with those waterfalls, it has distinct characteristics and uniqueness so that more people are interested in visiting the site as the time goes by. These people choose this place to do several fun activities like photography and trekking, after all. Some of them also take advantage of the atmosphere for relaxation on weekends.

The Nuance
The most noticeable characteristic of Jagapati Waterfall is the presence of three levels of landscapes on where tourists can explore. Once arriving at the site, visitors may see the pristine environment with numerous trees and bushes surrounding the waterfall. What is more? The next allure is definitely the clean and refreshing water, which is suitable for bathing and playing water. Not to mention the water discharge is not quite swift, so it is considered safe even for kids to play in it. Another important trivia is related to the source of water, which comes from Cilimbung River of Limbung Mountain!

Exploring Jagapati Waterfall
As mentioned earlier, the water comes from Limbung Mountain. This explains why it feels so refreshing and looks so clear. The water also flows to another waterfall called Tujuh Neglasari, which is also recommended to visit. Here is the thing. A trip to Jagapati Waterfall involves a short trekking and tourists need to pass through several landscapes like local farms and steep routes. This even becomes more challenging if they come during the rainy season, as the trek becomes slippery and dangerous. In order to prevent misfortunes, everyone should wear good footwear and come only during a good weather.

Once arriving at the site, tourists can explore the waterfall right away! For the best experience, tourists should come with a tour guide as he may tell about the history of the site to them. It is said the name “Jagapati” has the meaning of “preventing the death”. It is because the waterfall has a significant role in sustaining the nearby environment and animals. The water gives the life to them and keeps the ecosystem well over time.

The next impressive feature of Jagapati Waterfall is the presence of stunning natural pond with the beautiful color of water. During the hot season, the water has the color of Tosca but it turns darker during the rainy season. Therefore, tourists shouldn’t come during bad weather at all cost. Instead, they would miss the chance to see such stunning pond during the visit.

How to Get There
From Bandung City, tourists can directly go to Garut Regency by any local transportation service. Next, they can reach Cisompet Sub-District and head to Neglasari Village afterward. The whole trip may take about 4 hours and 3 minutes, as the distance is 125 km actually. As for the faster trip, though, everyone should take Nanggeleng – Cirahayu Street.