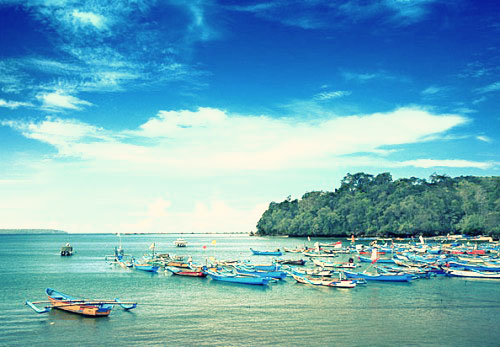 Bandung is the capital of West Java in Indonesia. Bandung is 180 kilometers southeast from Jakarta. Although it has a population of over two million the pace of city life is slower than Jakarta's. Today Bandung has a population of 2 million people, Bandung area an estimated 4 million. Bandung is situated on a plateau 768 meters above sea level with a cool climate throughout the year. Bandung is the most European city of Java. The raining season starts in Bandung a little bit earlier, then the rest of Indonesia. Normally the raining season in Indonesia is from October till May, the peak of the raining season is in January. The dry season is from June until August, temperature is then 25-30 degrees Celsius during the day. In the morning, the sun is almost shining every day, but in the afternoon many times it gets cloudy, for sunbathing we have to wake up early from 6.30 the sun is already there. In the evening when the sun is down the temperature has drops. The average temperature in Bandung is 22 degrees Celsius; the weather is pleasant all year round.

There are short drives up to the mountain resorts of Lembang and the Bosscha Observatory, and higher to the volcanic crater of Tangkuban Perahu, the only crater in Java accessible all the way by car as far as its rim. It is an awe-inspiring sight of emanating sulfur fumes. Descent into all the volcano's 12 craters is only possible with the aid of an experienced guide, because of the presence of suffocating gases at certain spots.

In Bandung, try to see the "Wayang Golek" wooden puppet show and hear the "Angklung" bamboo orchestra, as well as the classical Sundanese gamelan and dances. Several institutes of higher education are located here, including the country's prestigious Bandung Institute of Technology.